Due to the sharp increase in medical emergencies at games, in March 2022 the EFL (English Football League) told supporters to NOT alert the players in the event of a medical emergency in the crowd… 1https://www.mirror.co.uk/sport/football/news/medical-emergencies-crowd-football-grounds-26562478

Then in August 2022, The Premier League introduced a new rule to NOT stop games for medical emergencies, so medical staff can “fulfil their duties without most people knowing anything” … 2https://www.dailystar.co.uk/sport/football/premier-league-medical-emergencies-rule-27654385

… a compilation of media reports from the past year or so, of fans collapsing in the stands at games (and often dying) due to a serious ‘medical emergency’.
This video includes short excerpts from the film ‘On the Record’ by Oracle Films (https://www.oraclefilms.com/mattletissier) featuring the Southhampton and England International legend Matt Le Tissier –
Matt Le Tissier played for 17 years at the top level, winning 8 caps for England. He is quoted as saying “In my career, I don’t remember a single game being halted because of an emergency in the crowd”

This is just soccer

Imagine if fan collapses at other events were included.

… shines a light on Covid-19 vaccine injuries and bereavements, but also takes an encompassing look at the systemic failings that appear to have enabled them. We look at leading analysis of pharmaceutical trials, the role of the MHRA in regulating these products, the role of the SAGE behavioural scientists in influencing policy and the role of the media and Big Tech companies in suppressing free and open debate on the subject.

I was wilfully blind… until I wasn’t…

What’s worse than ignorance? The late, great Stephen Hawking tells us: the illusion of knowledge…

I was one of the first people to have the Covid-19 vaccine… in January 2021… I, at the time, did not even conceive… of the possibility that a vaccine could cause any real harm at all…

… a hero. When he learned he was wrong, he did the right thing: publicly admitted his mistake and called for the halt to the vaccines… at considerable risk to his reputation.

His U-turn on Covid vaccine safety could save countless lives – if only mainstream media would give his message the airtime it deserves.

END_OF_DOCUMENT_TOKEN_TO_BE_REPLACED

In this interview with Brian Gerrish, former ITV and BSkyB Executive Mark Sharman challenges the official Covid-19 narrative, including flawed statistics, high-level media censorship, government financial ‘bribes’ of the media, lost trust in doctors, vilification of those warning of vaccine damage, and the very real harm suffered by individuals who accepted the government promoted vaccines.

… includes an excerpt [at 35:00] from the powerful and emotional documentary by Oracle Films, Safe and Effective: A Second Opinion, which shows the heartbreaking reality of vaccine damage to a young woman, Georgia Segal. Her courage in dealing with her post-vaccine harm, and in speaking out so that others can understand the real truth about vaccine side effects, is outstanding.

Toward the end the BBC’s “Unvaccinated” was mentioned. More about that here.

Thanks for the reminder Oracle Films | OracleFilms.com 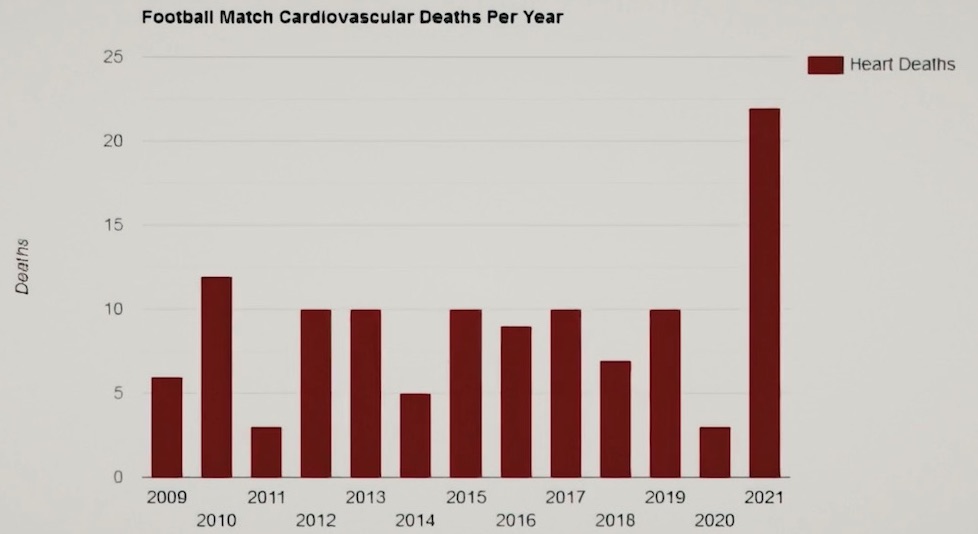 An exceptional midfielder and excellent penalty taker, after retiring from playing Le Tissier became a football pundit – most notably with Sky Sports. All was well1Nothing unusual reported on his Wikipedia entry as of June 2020. until August 2020 when “he was dropped” by Sky Sports.

Probably just a coincidence but that was around the time he was becoming more vocal about the Covid response. But it meant his Wikipedia entry needed at least this addition:

In 2020, Le Tissier became an outspoken critic on the reaction to the COVID-19 pandemic in the United Kingdom, with several tweets in which he criticised what he deemed to be an “overreaction” from the government and media, among others opposing lockdowns and mask orders. An image he posted on Twitter which implied a comparison between the Holocaust and having to wear masks during the pandemic was deleted.

Le Tissier then began to comment on and question the growing numbers of athletes AND sports fans collapsing. So by August 2021 someone had added this sentence:

In 2021, Le Tissier drew widespread criticism when he again promoted conspiracy theories. He tweeted a post suggesting that Christian Eriksen’s on-pitch cardiac arrest was an adverse reaction to being vaccinated.

People rarely ask questions with a genuine desire to understand. Instead they are often looking for reassurance about their own views, an opportunity to vent, to catch you out, start an argument, etc.

In such cases your answer is supposed to be brief – so they can quickly move in their anticipated direction. This seems especially the case around Covid injections.

Giving more than one reason throws a spanner in the works.