All Those Lies Are Hard to Keep Straight

… [December 2021]… AIER discovered a shocking revelation in emails received from a Freedom of Information Act (FOIA) request to Fauci’s office. In early October of 2020, Dr. Francis Collins, then Director of the National Institutes of Health, ordered Fauci and his trusted lieutenant Clifford Lane to wage “a quick and devastating published take down (sic)” of the Great Barrington Declaration’s premises.

… the records… contain a partially redacted email to Deborah Birx in which Fauci speculates that Scott Atlas, his anti-lockdown foil on the White House COVID Task Force, would attempt to sway the White House into endorsing the GBD. “Over the past week I have come out very strongly publicly against the “Great Barrington Declaration,” Fauci declared – an action that he conveniently has no memory of doing, according to his statements under oath from the Missouri lawsuit deposition1Currently on-going. Transcript of Fauci’s deposition released last Monday.…

… the email records we do possess contain ample evidence of Fauci’s involvement in the “take down” order, plainly contradicting his sworn deposition. In those emails we see Collins colluding with Anthony Fauci (while fantastically CCing Lawrence Tabak, Deputy Ethics Counselor at NIH) to craft talking points against the GBD in the media. Behind the scenes, we see them working with Deborah Birx to keep the GBD off of the White House COVID Task Force agenda. And we see Fauci’s instructions to Folkers to assemble a list of media op-eds attacking the GBD, with the apparent intent of parroting them back to the very same press as official talking points from the NIH.

Think about that for a minute. The Director of the National Institutes of Health all but ordered the Director of the National Institute of Allergy and Infectious Diseases to put together a smear campaign aimed at three distinguished scientists, each from an elite institution (Harvard, Stanford, and Oxford if you are keeping track at home), who were simply going where the science took them. 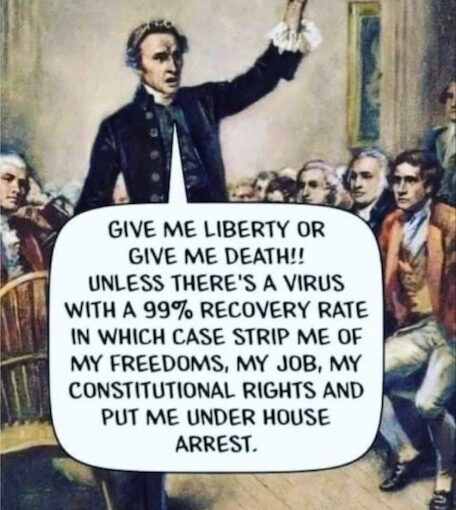 Don’t underestimate. This is a clever new slogan.

Because scared people will feel safer with ‘rules‘ controlling their own and others behaviour. They will also welcome policing of those reassuring rules – regardless of human rights violations involved.1As already shown by reactions to lockdowns, masks, jab passports, censorship, bodily autonomy, religious and personal freedom…

END_OF_DOCUMENT_TOKEN_TO_BE_REPLACED

Subtly bigging-it-up in the UK!

Two days ago The Off-Guardian drew attention to edits the National Health Service of the United Kingdom made to their Monkeypox page.1Using the Wayback Machine – one of many internet archive services. Here’s the NHS page before editing (Nov 2, 2021) and after (May 7, 2022).

Edits which mean Monkeypox now seems worse than it did before. Not dramatically worse. But still, worse.