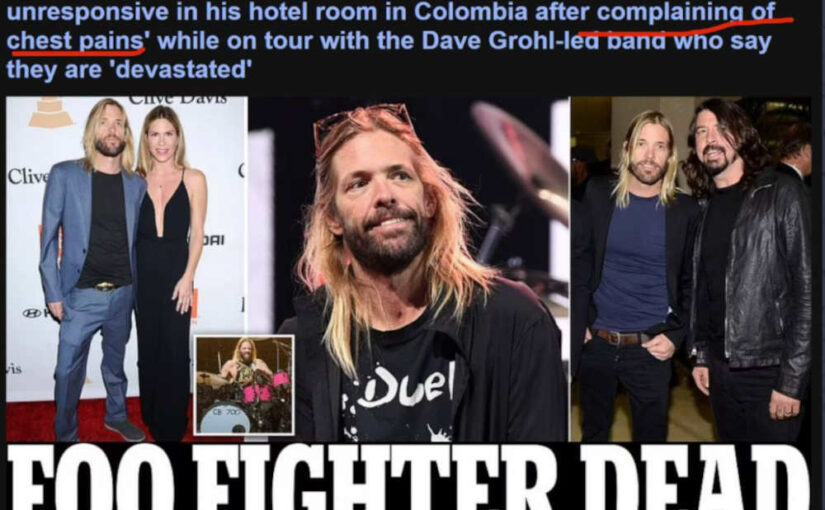 It’s clear from Mark Crispin Miller’s series In memory of those who “died suddenly”.1Some of his other Substack articles may leak into this search result.

As we have seen since early 2021, the “sudden death” of someone very famous, when there’s clear evidence of prior “vaccination,” always seems to trigger an obfuscatory wave of propaganda claiming, or implying, that the cause of death was not injection. We saw this happen last year, after the deaths of DMX and Marvelous Marvin Hagler, and, this year, after the deaths of Bob Saget and William Hurt.

And now the sudden and untimely death of the Foo Fighters’ Taylor Hawkins—whose prior (and unwilling) “vaccination” is beyond dispute—has sparked the same diversionary effort, to have us think that Hawkins was done in by drug abuse.

Like Mayors in Austria and Germany (although Politfact says there’s no connection with the jabs. So we can ignore these coincidences. Phew! What a relief, eh?!)3Note: at least two of those mayors died before vaccines were rolled out in their region. But they could have been involved in the trials running at the time; or used pull to acquire jabs ahead of time. However even if they hadn’t been jabbed the issue here is that the colossal numbers of unexpected deaths happening all of a sudden worldwide is not being reported or investigated.